Thailand is situated in the heart of the Southeast Asian mainland, Thailand covers an area of 514,000 square kilometers. It is bordered by Laos to the Northeast, Myanmar to the North and West, Cambodia to the East, and Malaysia to the South.

Thailand's capital, known internationally as Bangkok but to Thai as Krung Thep (City of Angels) sprawls over an area of some 1,500 square kilometers on both sides of the Chao Phraya River. Established in 1782 by King Rama I, founder of the Chakri Dynasty, Bangkok has been the home of the Royal Family ever since. Today, Bangkok is home to over 6 million people. Here also are located all government ministries, the police and military headquarters, the Supreme Patriarch of the Buddhist faith, the most prestigious universities and schools, the best medical facilities, important international organizations, and the greatest collections of art, museums, newspaper publishers and television stations.

Thailand has 23 airports and 7 international airports, namely Suvarnabhumi, Don Muang, Phuket, Hat Yai, Chiang Mai, Chiang Rai, and U-Tapao. All except U-Tapao are operated by the Airports Authority of Thailand.

Over 176,000 kilometers of national highways and rural roads link tiny hamlets with provincial capitals and major cities. The State Railway operates an efficient rail system linking Bangkok with northern, northeast and central Thailand while a southern route allows direct rail travel from Bangkok to Malaysia and Singapore. Despite the rapid growth of inter-provincial buses, train travel is still popular with a large segment of the population.

Though the great majority of Thailand is ethnically Thai and Buddhist, the country has a substantial number of minority groups who have historically lived together in harmony. Of these, the Chinese are perhaps the most numerous (particularly in urban areas), though they have become so thoroughly assimilated it would be difficult to isolate them as a distinct group. Similarly, while there are Lao and Khmer groups in the Northeast and East, nearly all regard themselves as Thai, culturally as well as by nationality. More clearly defined as an ethnic group are the Muslims, who are mainly concentrated in the southern provinces, and assorted hill tribes who live in the far North; there are also sizable communities of Hindus and Sikhs in large cities like Bangkok.

Thailand is a warm and rather humid tropical country. The climate is monsoons, marked by a pronounced rainy season lasting from about June to October and a relatively dry season for the remainder of the year. Temperatures are highest in March and April and lowest in December and January.

The official national language, spoken by almost 100 per cent of the population, is Thai, classified by linguists as belonging to a Chinese-Thai branch of the Sino - Tibetan family. It is a tonal language, uninflected, and predominantly monosyllabic. Most polysyllabic words in the vocabulary have been borrowed, mainly from Khmer, Pali or Sanskrit. Dialects are spoken in rural areas. Other principal languages are Chinese and Malay. English, a mandatory subject in public schools, is widely spoken and understood, particularly in Bangkok and other major cities.

Theravada Buddhism, the national religion, is the professed faith of 95 per cent of the population. There is total religious freedom and all major religions can be found in practice.

Thailand is governed by a constitutional monarchy with His Majesty King Bhumibol Adulyadej as Head of State. Official power rests with the government, personified by the Prime Minister, the Parliament, and a bureaucratic system that reaches down to the village level.

Legislative power is vested in the Parliament, and exercised through a bicameral National Assembly consisting of the publicly elected House of Representatives and the Senate. The Parliament must approve all legislative matters of national policy, which then require the King's signature before becoming the law of the land.

In Bangkok Metropolis, they are, for example, the Civil Court, the Criminal Court, the Juvenile and Family Court, the Central Labour Court and the Central Tax Court, including Kwaeng Courts which have jurisdiction over minor civil cases and criminal cases with maximum punishment of imprisonment not exceeding 3 years or fine not exceeding Baht 60,000 or both. In the provinces, they are the Provincial Courts, and in some large provinces the Provincial Juvenile and Family Courts and Kwaeng Courts are included.

Thailand's national flag, ceremoniously raised each morning in every town and village, is composed of five horizontal bands of red, white, and blue. The harmony of design expresses the complimentary nature of the three pillars of the Thai nation.
This tri - colored flag, called in Thai the "trirong", first introduced by King Vajiravudh (Rama VI) in 1917, succeeded an earlier design that placed a white elephant (emblem of the absolute monarch) on a red background.

Thailand is at GMT+ 7 hours, and 11-12 hours ahead of Canada’s Eastern Standard Time (depending on daylight savings). 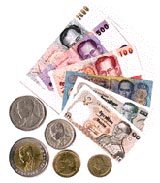 Country code for Thailand is 66. Bangkok area code is 02.
Telephone charge for home phone is normally 3 baht for one time use in the same area code (flat rate). There are two types of public phone available; coin type and telephone card type.

Official working days are Monday to Friday.  Many holidays are also related to Buddhism.

The Thai Community in Canada